Nasos looked Kostas infuriated and said, “Come on man, this can’t go any longer. You need to step up your game; it’s a pity because you’re brilliant, and you absorb all this knowledge, but you need to take some serious action. You need to find what drives you, what motivates you and use it to your advantage. This bastard (pointing at me) has found this fucking Ferrari car, and it’s all he thinks about. That’s the mental picture that drives him. That’s the force that moves him forward.”

This story took place a few days ago during the mastermind meeting I had with my fellow entrepreneurs.

Although Nasos called me a bastard I knew he was totally right.

Emotions and their importance

You see; Us people, are emotional creatures. No matter how much we love to say that we’re rational, almost every decision and action we make are based on emotions.

Like I’ve explained before, being driven by your emotions is not a bad thing.

BUT, this stands true only when we shape our emotions in such a way that are pushing us towards the right direction.

There are two fundamental reasons why we are emotionally driven. This happens not only to speed up our decision processing method but also to motivate us further into taking action. Emotions live in our limbic system, a part of the brain way more ancient than our neocortex (which is responsible for the rational thinking).

Let me give you an example to better illustrate this.

Supposedly you are walking on the street and you see a snake next to your feet. Your emotion of fear will kick in, and you will try to leave as far as possible from the source of threat. Even if you rationally wanted to go and pet the snake, there’s a driving force way stronger than your logic.

This is a purely an emotional decision. Your ancient brain knows that in general, a snake is something potentially dangerous, so you need to move away. If an emotional reaction didn’t take place, you should take your time and think a few seconds before you make a rational decision. But while you were thinking there was a good chance the snake could have bitten you.

So, emotions are good. We need them. But here’s the caveat (another savvy word I learned in the same meeting). Until we learn how to control and steer these emotions for our benefit, they are a very dangerous trap we might fall in.

Unfortunately, in today’s modern environments, and due to bad social programming, it’s very hard to distinguish which emotions are helping us and which aren’t.

For example, if you think the example above, the emotion of fear when we see a snake is helping us. But what about the emotion of happiness when we eat a chocolate bar?

What about the emotion of anger when someone drives like a jerk on the street?

Or what about the emotion of laziness when we need to put this extra hour of work?

You see where I’m going with this?

Emotions are good. But only the helpful ones.

How to find your “Ferrari”

So what the hell does an Italian car have to do with all this?

Well, it’s pretty simple actually. Have you ever seen a carrot stick? 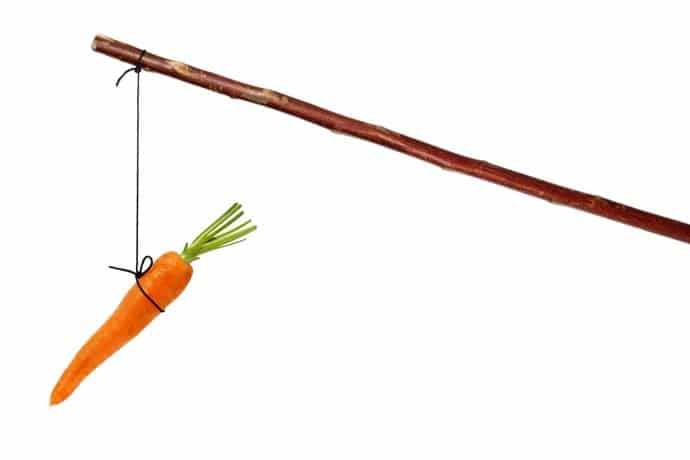 I am no horse, so a carrot isn’t a powerful motivational force for me.

But the damn Ferrari is!

I know what some of you might be thinking right now. Where’s the nobleness about this? It’s just a car man.

Shouldn’t you be motivated by love, happiness, world peace, etc?

Well, to that I got only a thing to answer.

If my ultimate goal to achieve greatness passes through a car, or a ship, or world peace, or to save every poor black child in Africa, then so be it.

I won’t judge anyone’s “Ferrari” as long as it keeps him on track to a life of greatness.

The whole “find your Ferrari” thing comes with three prerequisites in order to work.

Although world peace and salvation of African kids are great causes, they are not well defined. You cannot clearly depict them. Imagine if I ask you to draw world peace. How it would look like. Try to draw a mental image of world peace. It’s difficult, isn’t it?

Now, what about the Ferrari? It’s well defined and clear. Everybody knows how it looks like.

Our mind isn’t very good at keeping things that are way too abstract. That’s why a specific tangible symbol like a car, a ship, a plane or even a pen works better.

You see my point?

In order to take advantage of the “Ferrari motivator,” you will need to define a goal so clear and explicit that you could draw a picture of it very easily.

The more real it feels, the better the results.

Think about the snake example. It will make you run if you see one next to you, but it won’t get you move if someone describes something vaguely about how poisonous the venom is.

Apart from being specific, your “Ferrari” will need to be important to you. I mean I know a lot of lads, who don’t give a crap about a bloody Ferrari. It wouldn’t motivate them to do something great not in a million years.

Won’t matter. It doesn’t have to be a car. It could be an educational institution, a mansion, the body of Arnold Schwarzenegger, a cruise ship, or even a spaceship.

As long as this thing is important to you and makes you get your lazy ass off the couch, it will do.

I don’t know why exactly, but “Ferraris” have a specific emotional impact on me. So I take advantage of this fact. I have a poster of a Ferrari 458 Italia on my wall to constantly remind me that I have to work even harder to get it.

I can remember countless times when I felt a bit tired or bored to complete another task I had to do. But each time I feel fatigued, I have this little trigger in my mind that goes off and tells me, “What the hell are you doing now? There’s no time for rest. This Ferrari won’t buy itself you know?”

And this is all I need to keep pushing.

Like I said before, the whole trick here is to create an emotional reaction. Search deep inside you to find it. What are some things that create you strong emotional responses? Keep pushing yourself to constantly associate them with your success.

For me Ferrari equals success. Period.

Search for yours, and when you find it, print this, make a poster and keep looking at it each and every day. Keep repeating yourself:

“That’s what success looks like. I want that, and I won’t stop until I get it.”

[bctt tweet=”That’s what success looks like. I want that, and I won’t stop until I get it.” username=”projectbebest”]

Somebody asked me, “So what happens after you get the Ferrari?”

I said. “I don’t know man; I really like this wallypower 118 as well. I will work even harder to get one of these.”

Your “Ferrari” should be both difficult to get but upgradable on the same time.

Set a goal which is realistic, hard to achieve but not impossible. That way you will keep yourself always in the “flow.”

As an example, you could set as a goal to buy the moon, but while the view should be quite spectacular up there, it makes it kinda of an impossible goal. (Who the hell owns the moon anyway…?)

Just spend some time and come up with a solid plan.

Your should always upgrade your top goal once you achieve it. This way the horse (you) will never catch the carrot (the “Ferrari”).

You always need to have a higher goal and purpose in life, and according to many highly successful people, this is the ultimate deciding factor when it comes to greatness.

As my favorite guy of all time, Steve Jobs has said:

Here’s a nice prank with snakes that will cheer you up. (Reactions are real though).

PS. Nasos and Kostas my men, thanks for the idea of this article 😉