Have you ever watched winning teams or athletes a bit closer? I mean world class level players?

Have you ever wondered how the keep winning, scoring phenomenal steaks?

Well, one easy explanation is for sure that they’ve practiced like hell. They have repeated the same kinds of exercises and tactics again and again. They have used methods of visualization, and they have ripped the rewards on that.

But. Sometimes we’ve all witnessed fantastic streaks of wins, that can’t be explained based on conventional wisdom.

“The pinnacle of the Schumacher era at Ferrari was undoubtedly the 2004 season when, incredibly, Michael won 11 of the first 12 races. The only race that Schumacher didn’t win during that hot streak was the Monaco Grand Prix where he crashed out of the lead. McLaren and Williams had both introduced cars with design flaws early in 2004 which amplified Ferrari’s massive championship victory.

Throughout Formula One history only five drivers have scored five or more wins in a row. Michael Schumacher did it twice during 2004.

Schumacher’s success with Ferrari ensured that he remained crowned Formula One World Champion for 1,813 consecutive days, possibly the most impressive statistic of them all. It will be a long time before Sebastian Vettel, or anyone, is able to match that.” Source.

I happened to be a fanatic watcher of the sport back then, and I still remember this period.

For sure, Schumacher had the best car, and he was the best driver (of all time according to my opinion and the numbers), but what was happening then, had to do with one more factor, one that’s easy to oversee unless you know where to look.

When the season kicked off, Ferrari and Schumacher had a win in Australian Grand Prix, then Malaysian, then in Bahrain, etc.

Victory after victory confidence in both driver’s and team’s skills grew. The more wins in their streak, the harder the loss seemed to be. Or should I say, unimaginable?

Proof to that is, although this year they lost race number six in Monaco, they repeated an even greater streak with six more consecutive wins after Monaco.

Although I wasn’t inside Ferrari’s paddocks, I can take a safe bet about how it must felt back then. I guess none of them could even imagine the possibility of losing. Their confidence, hunger, and ambition had grown so large that they could hardly expect anything less than victory.

By the time each race started, they already knew they’d win. Can you possibly imagine how powerful this kind of thinking is? It’s almost like a reality to you.

You eliminate all other outcomes, and all you see is success.

And trust me when I say, the same principle applies to almost every aspect of our life.

How they did it

Whether it’s about business, health or relationships, we can all achieve similar results. I’m not talking about becoming world champion in F1, although this could be for some (of you).

What I’m talking about is, strategically prime ourselves to enter that state.

You can call it whatever works for you. Some call it positive spiral, some others a winning streak, some even a perma-state. It doesn’t matter. All that matters is to train yourselves to enter this winning state as often and as faster as possible.

The best way I’ve found based on my experience is to try entering this state little by little.

In the beginning, all you should care about is scoring small victories. Start by eating the low-hanging fruits. I know that it might not appeal as sexy, but trust me, you need to walk before you run.

The better you become at your field, the more wins you’ll score and the easier it’ll be to enter the positive spiral.

I’ve tried this approach on countless occasions, and it didn’t fail me not even once.

It can work like a charm for your business issues, your health or your relationships.

For example, we all dream of building a multi-billion dollar company. But with zero knowledge, funds, connections and confidence, it’s extremely hard (if not impossible) to achieve it.

The same way you cannot become a master at dating unless you train your social skills, have a few dozen dates and score some *victories* first.

As time passes, you’ll notice that the better you become at something, the easier it’ll be for your brain to push you towards this. The more pounds you lose, the more eager you become to improve further.

The better you become in business and the more money you make, the harder you want to push to earn more, etc.

It all boils down to basic brain chemistry (like everything). The more you associate a particular result (i.e. making more money), with a positive emotion, the more your reward brain centers (mostly basal ganglia) work to give you more of this.

But at the same time, besides wanting more of it, it also has another positive side-effect. Winning (or losing in the opposite case), gradually becomes your reality and comfort zone.

If all you taste is win, it becomes the “normal” and expected outcome. You don’t think about losing at all. It just seems like impossible to lose. That’s how Schumacher and Scuderia Ferrari felt back in 2004.

Why you need to start low

OK, since winning is so sexy, why should I begin scoring small wins first?

Again, this is a brain chemistry game. The brain is wired in such a way that besides producing, positive emotions on wins, it’ll also produce “feel bad” hormones when losing.

And to be fair, these hormones are way stronger that the reward ones. It all makes sense if you think that during our evolutionary past, finding a fruit or having sex, was positive and rewarding, but if a saber-tooth ate your a$$, it was game over.

So our brains had to evolve in a way that, losses and negative emotions, would have a significant impact on our psychology.

The best way to overcome this is to start low like I said before. You need to prime yourself for victory. If you wanna earn millions, you don’t start by founding the new Facebook. Odds of failure are very high.

Start small and within reach. As time passes, you’ll become better and better at what you do, and then you can graduate to your next level. Think of this as a video game. You never start the first level by fighting the final boss.

If you wanna build a successful business, you need to start studying a lot about this business. Then you need to take baby steps into putting things in place, that won’t cost a ton of money. Then as time passes and you become more efficient, you’ll grow faster and bigger. 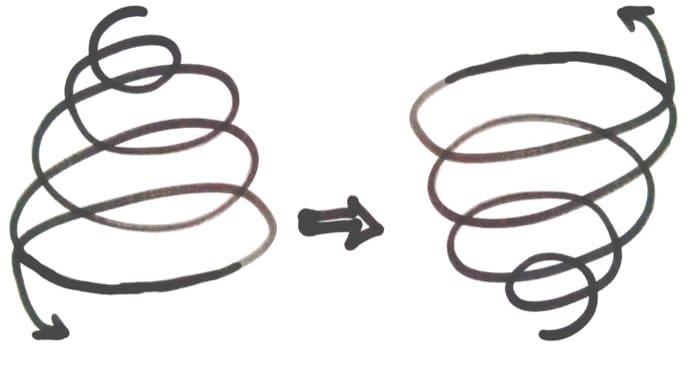 Take a closer look at the picture above. The reason the spiral becomes wider is that positive (or negative) results and emotions tend to compound over time.

So your first few victories might have a small psychological impact on you. But the more of them you score, the greater impact they’ll have.

The state we want to achieve is the one, where losing seems almost impossible.

And trust me it can be done.

Here’s to the greatest racing car driver of all time.